Role of Homeopathy in the Cerebral Palsy Treatment

Cerebral palsy consists of a group of disorders that are related to the problem in muscle movements and coordination. If we split the term cerebral palsy then the word ‘cerebral’ refers to the brain, while ‘palsy’ means weakness, disability or paralysis of body movements, which very much clarifies what kind of disabilities are grouped under this term. This disability mostly results due to damage caused to the brain usually during intrauterine life. The disorder is usually diagnosed during infant life or preschool age. It is considered to be one of the most common motor disabilities that happens to children. 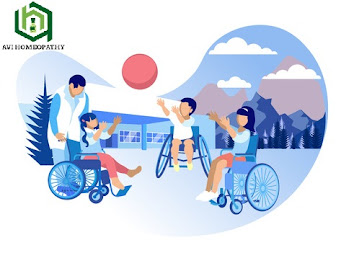 Being a spectrum disorder the characteristic sign and symptoms of cerebral palsy varies greatly from person to person. Children usually present with impairment of movement, which is mostly associated with problems like, abnormal reflexes, floppiness or rigidity of the limbs and trunk, abnormal posture, involuntary movements, unsteady walking. Children may present singly with the symptom or may have a combination of any of these problems. Children might also present with eye muscle imbalance, which might make it difficult for them to focus on any object.

Cerebral palsy represents a group of disorders, so its sign and symptoms vary greatly. Some of the common ones may list as- delaying of the motor skill milestones, like rolling over, sitting up on own and crawling, muscles may be too floppy or too stiff, delayed speech with difficulty in speaking, spasticity, with a stiffness of muscles and exaggerated reflexes, lack of muscle coordination, involuntary movements, drooling, difficulty in swallowing, difficulty in walking, the dominance of one side of the body, and sone of the neurological problems, like seizures, intellectual disabilities.

As mentioned earlier, the cause of cerebral palsy is mostly related to damage in the brain tissues during intrauterine life, but in most cases, the exact cause is never known. Some of the other possible causes may include- gene mutations, maternal infections, that may affect the foetus, fetal stroke, bleeding into the brain of the foetus or newborn, infection in infants, traumatic head injury, decreased oxygen supply to the brain during intrauterine life.

Homeopathy treatment for cerebral palsy is usually done with an individualised or personalised remedy for every child. Individualised medicines are chosen after careful case taking of the patients, trying to find the characteristic symptoms of the individual patients. As in the case of children, it is almost impossible for the child to narrate and describe his symptoms, parents need to be interrogated for the case taking. The individualised Homeopathic remedy has the capability to work on the mental sphere of the child and establish a sense of mental harmony which is disturbed in cases of cerebral palsy.

Role of Homeopathy in the Cerebral Palsy Treatment

Cerebral palsy consists of a group of disorders that are related to the problem in muscle movements and coordination. If we split the term ...